There’s a lot to think about when choosing a school—private or public, religious or secular, co-ed or single-sex. Parents try to make the best choice for their child and family, and ultimately just choose a school and hope for the best.

I live in Pittsburgh, where there are numerous schools to choose from. In my neighborhood alone there are two public schools, a dozen or so private and charter schools, a Jewish day school, a lab school and an all-girls school. When I was four years old and about to start kindergarten, my parents decided to send me to the public school near our house. Given the respectable reputation, good teachers, close proximity to our house, and of course, the price (free), it seemed like the right choice. 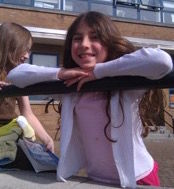 Daniella Shear, as an elementary school student, standing outside of her school.

At my synagogue, there were, and still are, a lot of kids who go to the Jewish day school: Community Day (CDS). While my siblings and I weren’t the only kids in the congregation who went to another school, we were certainly in the minority. When I was younger I couldn’t figure out why I too didn’t go to CDS. Being Jewish was important to my parents, right? They wanted Judaism to be important to me too, right? So why didn’t they send me to the Jewish school? I was also annoyed with my parents because of their decision to send me to public school meant I had to spend my Sunday mornings, Tuesday afternoons and Thursday afternoons at Hebrew school. To add insult to injury, when everyone talked about what had happened at school, I couldn’t relate and therefore felt excluded. During youth services, the kids from CDS always knew more of the prayers than I did, and their Hebrew was always much better.

I had gone to a Jewish preschool, I spent my summers at Jewish summer camp and I went to synagogue regularly, but I still felt inferior to the CDS students. “In an ideal world, all Jewish kids would go to day school,” I once overheard a rabbi quip at a synagogue meeting. I found that comment unsettling. If a rabbi had said that, where did it leave me? It felt like the thoughts I had about not fully belonging, or about being less-than in my congregation were confirmed.

Day school offers some things that you can’t get in public school, but the opposite is also true.

My public school education is one that exposed me to a diverse community with many different cultures and languages represented. Although the curriculum isn’t especially challenging, the lessons I learned outside the classroom helped shape me into the person I am today. While I’m not saying that day school isn’t the right choice for some students, I think it’s unfair to view a public school education as inferior; day school offers some things that you can’t get in public school, but the opposite is also true.

I think I would’ve been happy if I had attended CDS, but my parents chose public school, and I have been really happy there too. Selecting a school is a difficult choice and depends on many factors. I don’t think Jewish day school is a bad choice, but there were real and legitimate reasons that led my parents to decide that it wasn’t the best choice for me. When I am a parent, I might send my kids to Jewish Day School, or I might not. Either way, my kids will be raised Jewish, and I hope that no matter where they attend school, they feel fully welcome in their Jewish community

Daniella Shear is a rising senior at Winchester Thurston School in Pittsburgh.

Editor’s Note: This content was produced in partnership with the Jewish Women’s Archive.